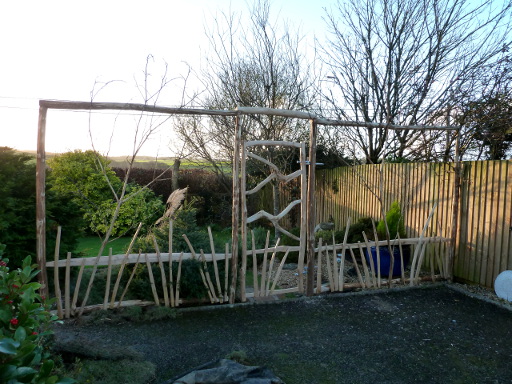 Handcrafted rustic frames and gate made from Sweet Chestnut wood

The design challenge was to create a unique semi open divide between the edge of the driveway into a garden. This particular garden has a South-Westerly aspect, with rolling Devon hills beyond. The customer wanted something specially designed to enhance their garden, be handcrafted and unique.  After considering a few options a design was agreed that involved creating two sculptural wooden frames either side of a central gate. This was to be handcrafted in durable Sweet Chestnut wood. Curved cleft pickets of various lengths were fitted in small groups to the bottom rails. Two pieces of Sweet Chestnut branch wood were stripped of bark and incorporated into each frame. 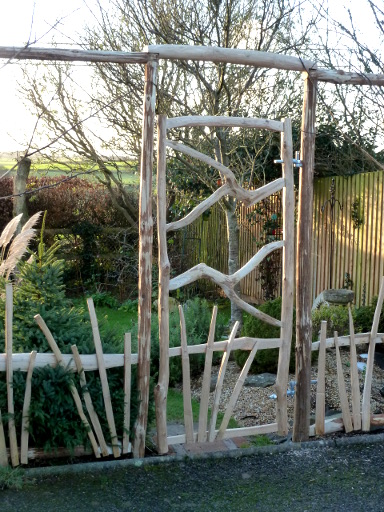 A bespoke three foot by six foot lightweight gate was designed to fit with the cleft wood frames. The lower section of the gate followed the theme using curved pickets. For the upper section a piece if mirror cleft Sweet Chestnut branch wood was morticed and tenoned into the gate frame. The gate was hung with galvanised hook and eye hinges. 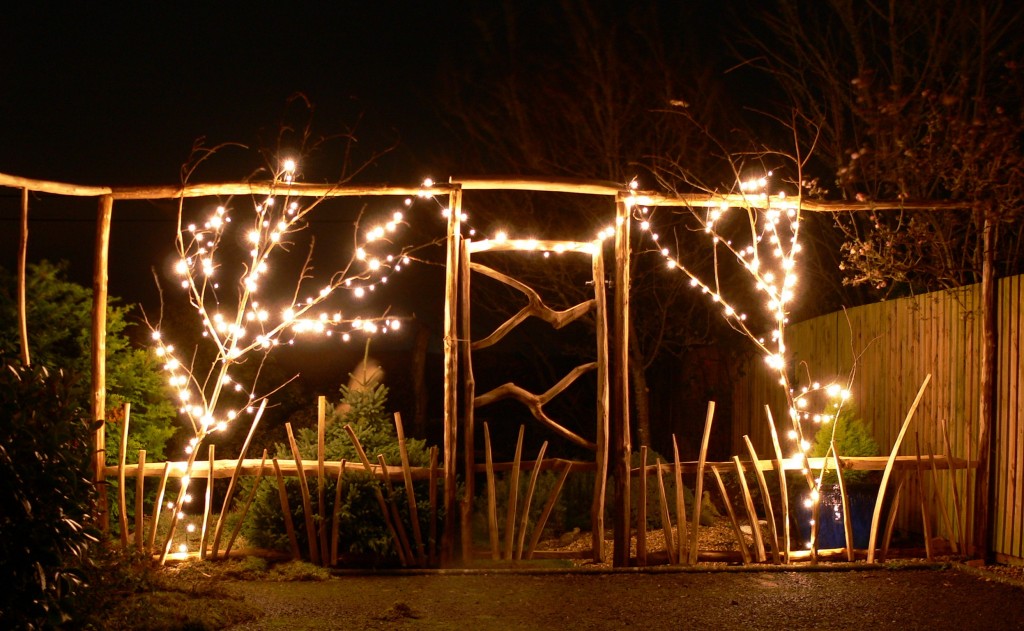 The finished fence frames and gate, decorated with exterior lights

A curved link piece was added to join left side frame to the side of their house. The frames were decorated with exterior lights for the Christmas period. The customer plans on adding wire netting to the back of the frames to deter their Persian cats from escaping to the lane from the enclosed garden. Fortunately their cats aren’t agile climbers.

Designing and installing bespoke handcrafted garden items is what we specialise in. We work with our customers to create something different. Please browse through some of our other projects for examples of our work.

To discuss your design requirements please call on 01409 281549 or email to info@wealdenheartwood.co.uk

These Oak gates were designed and made for a customer using greenwood. The gates were styled to fit in with their surrounding environment. They also needed to be livestock and deer proof.

To make these gates the green Oak round wood was split into quarters using steel wedges. A froe was used to cleave these quarters into the thinner pieces used to make the individual gate components. The rough cleft Oak was smoothed and shaped further using a draw-knife. The greenwood was left to partially season for a number of weeks before the final cutting and assembly of the gates took place.

After the Oak had been rested, the next stage was to mark and cut all the tenons and mortices prior to assembly. The rails were carefully chosen in pairs to ensure a degree of continuity between both gates. This design uses five rails and these are fixed using stainless steel nails. Stainless steel nails are used to limit the chemical reaction of the tannic acid naturally present in Oak with the metal, this avoids dark stains appearing on the wood, which you would eventually get with galvanised or other non-stainless steels grades of nails.

Finally, the vertical pales and diagonal braces were cleft, cut, shaped and fitted to the gates.

All our rustic gates are individually designed and handmade for each customer in either Oak or Sweet Chestnut. For further details, please email info@wealdenheartwood.co.uk or phone (01409) 281549 to discuss your requirements. This project involved making a number of bespoke Sweet Chestnut panel infills, which were installed in the upper area of a barn. Sweet Chestnut had been used for the roofing components, so the customer was looking for the same wood to be used. The stair ladder and upright pieces to hold the Chestnut panels were made by a carpenter using reclaimed Oak. Due to the variability of the Oak pieces, each Chestnut panel was different in size and was custom made to fit each section. The handrails of the stair ladder were made from Sweet Chestnut and contrast the darker reclaimed Oak frame and treads. The panel spindles were made from cleft Sweet Chestnut pales, which were installed into mortices made in the outer frame. A froe is used to split the wood down the grain and a drawknife used to smooth the surface of the pales. The panels have a unique handmade look that blends in with the stone, exposed beams wood and thatched roof of the barn. Greenwood was used for all the Sweet Chestnut components. The final piece was a bespoke gate made to fit at the top of the stair ladder.  This was designed so that the gate could only open inwards, which was achieved by extending the top left section of the gate. This a good example of using green Sweet Chestnut for various interior components.